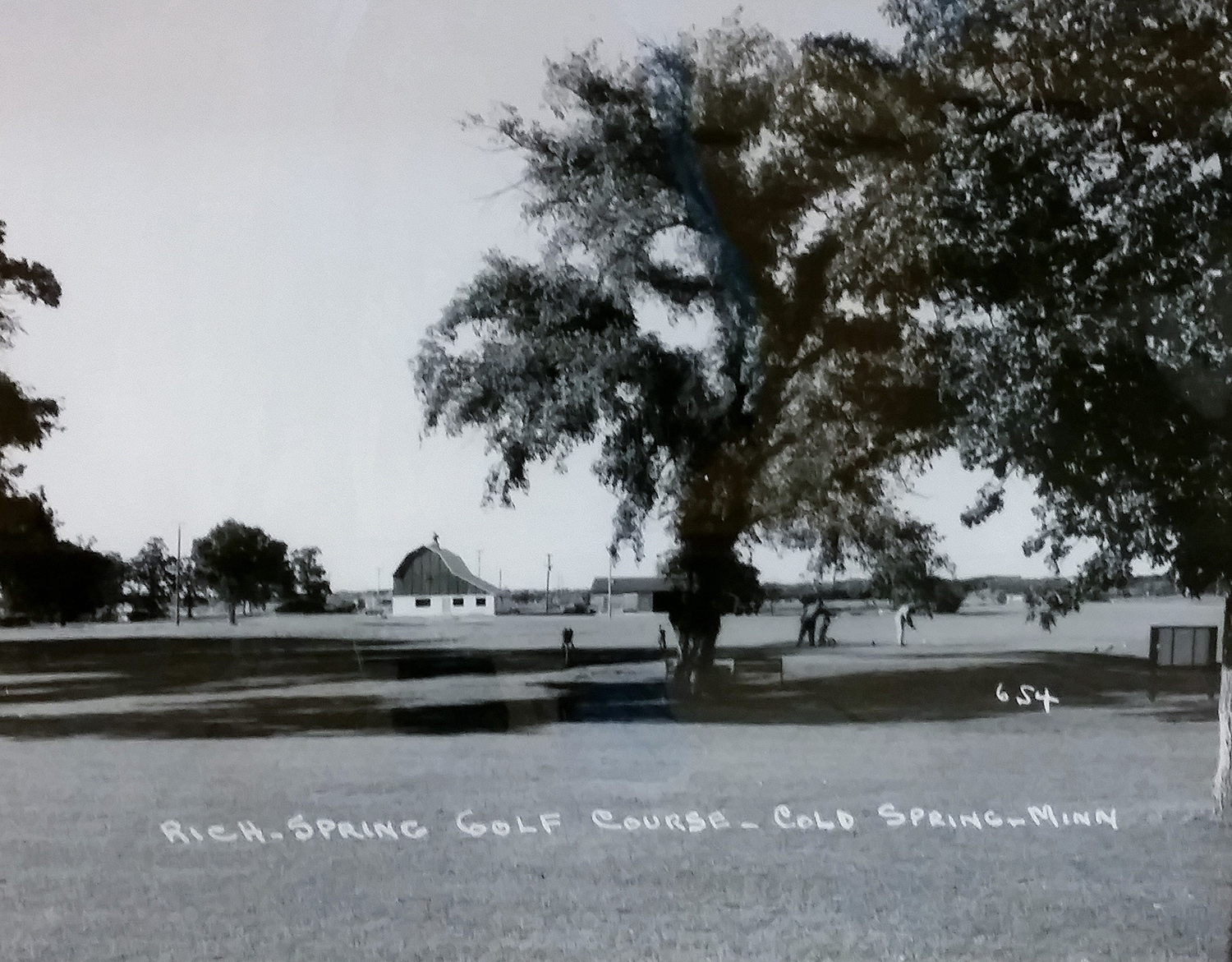 Rich-Spring Golf Course in 1962, the year league play began. The barn in the background became the clubhouse.

In the spirit of old-fashioned barn raisings, quilting bees, and threshing crews, in 1960, golfers from the Richmond, Cold Spring, Rockville, St. Martin, Kimball, and Watkins area took on the task of building what was to become a first-rate golf course.

Rich-Spring had its beginnings when a group of men and women from the area became disillusioned with sand greens on area golf courses and the distance they had to travel to those courses.

Three men, Dame Rausch, Bob Feldhege, and Rich Fink, decided if they wanted grass greens on a course close to home, they would have to build one themselves. They would build a blue-collar course amenable and affordable to golfers from the immediate area. They felt their inexpensive clubs with wooden shafts purchased from local hardware store catalogs did not fit the country club image but would be acceptable at a less elitist course.

Three sites were looked at and considered. The Clemens and Patricia Janssen farm was chosen. It edged Great Northern and Schneider Lakes on the Richmond Chain of Lakes to the west and Minnesota State Highway 23 to the north and it was easily accessible. The tract of land was considered non-productive, worthless farm land. Although in an earlier time, crops had been plowed, planted, and harvested on it. Portions were pasture landcows had roamed the property. It had few trees and seemed an ideal golf course location to the early enthusiastsand it was for sale.

The property had recently been purchased by Minneapolis entrepreneurs LaBelle and Sandager who realized early in the 1950s the potential for residential development on lakeshore property. For them a golf course further valued the property.

Joe Willenbring, Cold Spring attorney, was the legal representative for the board. After careful consideration by both parties, papers were signed.

To finance the building of a new golf course, they elected to sell shares. Stock in the corporation was to sell for $100 per share. Payments could be made by installments. By-laws were drawn up, discussed article by article, approved and adopted by the board. In less than a year, they raised $18,000 by selling shares. No one person could own more that one $100 share, $4.17 was to be placed in a general operating fund, 83 cents in a tax fund, and $95.00 in a capital operating fund. Control was to remain with a duly elected board of directors.

Rich-Spring was the designated name for the course as most of the early planners were from either Richmond or Cold Spring.

Russ Hoffman was put in charge of construction and to act as coordinator between the directors and Tim Murphy, the course designer. Frank Schmitt was hired as grounds keeper. Wally Backes was hired to cut the weeds.

In October, 1960, a sketch of the layout of the course was presented to the Board. Par was to be 35.

As the work progressed, both Richmond and Cold Spring residents realized the project acted as a bringing together of the two towns. They worked together on a joint project. Much of the work was done by recruiting volunteers.

Many believe that had it not been for the volunteer workers, the course would not have been realized. Groups of volunteers raked, mowed, cut trees, and dug out stumps. Interested men, women and children gathered together to pick up brush, branches, boards, and other debris. They picked rocksfive-gallon pails full at a time. They came after work, in the evenings, on weekends, even on Sundays after church services. It was said They pulled all kinds of stuff out of the ground.

Until other arrangements could be made, an old farm shed was turned into a temporary club house. Women from the membership, including Dell Torborg, Mae Virant, Rose Mary Brinkman, Dorothy Peschal, Chi Thul, and others, collected green fees and sold cold drinks and snacks.

After the first golf season, the shed was destroyed and the old barn, still standing proudly near the lake facing the golf course, was renovated and made into the first clubhouse.

The barn was re-shingled, completely gutted and plumbed at an estimated $700.00. Cow stanchions and all interior barn equipment was pulled out. Volunteers from the Richmond Fire Department sprayed down the interior. Walls, floors, and rafters were washed, re-washed, white-washed, and painted. The concrete floor was replaced.

The club had little money to work with but with cooperation and volunteer help from the community, slowly the barn began to resemble a clubhouse.

Bill Virant was appointed the first course manager. It was said that he smelled the grass and if it didnt smell right, he knew it was diseased and had to be fixed. He attended classes at the University of Minnesota on golf course management and maintenance and care of the greens and fairways.

The course was officially opened on May 12, 1962, with some temporary greens still in place. Dame Rausch was hired by the board and temporarily put in charge of collecting green fees and managing the clubhouse.

Daily green fees were set at $1.50 per day on weekdays and $2.00 on Saturdays, Sundays, and holidays. A number of fund-raising parties with entertainment were held in the clubhouse over the course of the year to raise money for items in the clubhouse.

By the late 1970s, Spring Golf Club was a corporate-owned 9-hole public golf course with a clubhouse containing a bar, restaurant, and pro-shop. Membership was close to 250 persons per year.

There was strong support for expansion to an 18-hole course. A typical 9-hole round of golf could take up to four to four-and-one-half hours; 18-hole play could take six hours.

The back 9 holes was opened for golfers in 1982. Two Bridges were built, over #6 and between #3 and #16. Thirty-eight trees were planted by Chuck Schneider.

Two existing holes were also reconstructed, #1 and #18, to accommodate a revenue-generating driving range.

Rich-Spring continues to expand and grow through the cooperative effort of the patrons, stockholders and communities. It remains one of the most impressive 18-hole golf courses in Central Minnesota.

“I think one of the things that happened that made Rich-Spring so successful is that we had so many golfers in the area that were just geared to have a golf course begin. It was a new beginning for this area. It just brought people together. They all pitched in and worked hard to make it a success. And it turned out to be so much fun.”
(Mae Virant, Rich-Spring golfer, 2006.)

Call us today to learn more!